What Is The Power Chords Podcast?

Matt Herring and Brian LeTendre have been podcasting together for over eleven years (beginning in March of 2006), primarily as co-hosts of the long-running comic book and pop culture show Secret Identity. After more than 800 shows and 2000+ hours of audio, they decided to turn their focus to the other passion they had in common--music.

The Power Chords Podcast is a celebration of rock and metal music, with a focus on the bands and music we grew up with from the '70s, '80s and 90s. We're going to cover everything from Queen to Motley Crue to Megadeth, with an emphasis on hooks, riffs, harmonies and melodies. Think about he glory days of '80s rock radio, and that's the sweet spot for our podcast.

Each episode we'll be talking about the music news that interests us the albums we're listening to (both old and new), and the shows we're going to see. We'll also be interviewing musicians form your favorite bands, as well as creators who are music fans like us.

So, pull on your jean jacket, grab your walkman and let's rock! 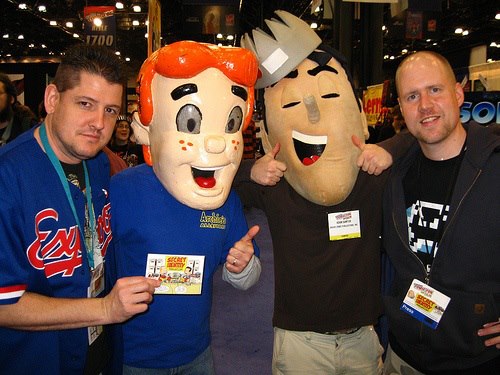 Matt Herring is the former lead singer of the '80s band Head First, and a former DJ for Lazer 99.3 FM in Northampton, Massachusetts. He's spent the last eleven years co-hosting the Secret Identity podcast with Brian LeTendre, and is also the host of 53:5--The Official Stryper Podcast. When he's not waxing poetic about music, Matt is writing books about the things he loves. Since 2014, Matt has put out books on surviving comic conventions (Comicopolypse), vending at shows (Pow, Bam Sell), everyone's favorite doctor (The Unofficial Doctor Who Companion) and alien invasions (Monkey See, Sea Monkey). Matt's currently putting the finishing touches on a book exploring UFO's discography entitled UFO: Your Favorite Band's Favorite Band. You can keep up with all of Matt's projects over at www.mattcantspell.com.
Brian LeTendre is a writer, podcaster and lifelong music nerd. In addition to co-founding Secret Identity and hosting it with Matt for eleven years, Brian is also the co-host of the popular metal podcast Thrash It Out, which he and writer Antony Johnston have been putting out since 2015. Brian is also an author of both fiction and nonfiction. His podcasting "how to" book Making Ear Candy just released its second edition in May of 2017. On the fiction front, Brian write the ongoing Parted Veil horror series, which currently includes three books (Courting the king in yellow, Lovecraft's Curse, Lovecraft's pupil). He 's also released a book of short stories (Intrusive thoughts--Volume One) and co writes a series called the Woodsview Murders with Jolene Haley, the first book of which--Harrowed--is currently available. You can catch Brian on Twitter at twitter.com/seebrianwrite and follow his work at www.seebrianwrite.com.